One of my favorite hip-hop songs came on the radio the other day, and man, did it make me feel like a kid again. It was Ghostface Killah’s, “All That I Got is You”, and even now, those lyrics never fail to get me choked up. It brings me back to a place that most people didn’t experience, a place most people don’t even believe I experienced. I often joke about coming from “the ‘hood”, but back then, the poverty I experienced was no joking matter. That Ghostface song (google the lyrics), and the quasi-recession we’re experiencing now, reminds me of my life during the recession of the early 1990s.

Some people, especially those in the suburbs, may not remember that recession. I can’t pretend to have all of the facts of the economic climate during that time, but I can give you the facts from the viewpoint of a kid experiencing it. IT WAS ROUGH. I remember my parents, my friends’ parents, THEIR friends’ parents, all getting laid off in record numbers. There was no work to be found; by 1993, the poverty level was at 15%, mostly concentrated in urban areas. With five kids, and a sixth one on the way, my family had a hard time. There was no such thing as new clothes and sneakers, no discretionary income (our discretionary income came from me and my older brother getting up early in the morning to beat the bums in their search for bottles to return at the grocery store so we could have penny candy money). We were lucky my parents were savvy enough to somehow turn $20 worth of groceries into a two weeks worth of meals, and that my mother wasn’t too proud to go to a food pantry to feed her children (and often times, the other kids in the neighborhood).

And the things we used to eat! That government tub of peanut butter that would always tear your white bread up when you tried to spread it on a sandwich, that yummy over-processed government cheese, powdered milk, fried bologna, sugar water…I could go on and on and on. I remember having rice and eggs for dinner on countless occasions. If we were lucky, we could get some nice cube steak or liver (I think of that now like, blechh!). In the summer, every public park had a free lunch program, and later on, a free breakfast program. Point is, we never went hungry.

Everyone I knew got food stamps (whether you were on welfare or not), yet everyone was embarrassed to be seen using any at the bodega. I can remember walking around the corner store for twenty minutes, waiting for every person to leave the store, just so I could pay for my things. Back then, there was no EBT or whatever it’s called now. These were actual paper “coupons”, so you couldn’t even pretend they were anything else. Neighborhood drug addicts would even sell their food stamps for cash, so they could buy drugs. That was the craziest hustle ever. I’m sure you could get a 50% return in food stamps if you found the right seller. 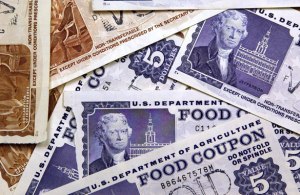 I sometimes feel like I’m so far removed from what goes on in poorer neighborhoods, because I’m not there anymore. When I tell people where I’m from, they think I’m making it up, that nothing good can come out of the inner city. Even though we all feel like we’re in something similar to a recession, to the people left in neighborhoods like the ones I grew up in, it’s been a recession for quite a while. There are young kids out there right now that are going through what I did, and I hope they can take those experiences and persevere. When I ran the idea of this post by a friend of mine, she asked if I was willing to disclose so much information about my life. At this point, I don’t see anything that I should be ashamed about, or regret. I feel like I need to remind myself of that life, so I can appreciate what I have now even more. As Charles Dickens wrote, “It was the best of times, it was the worst of times”, because it really was. It definitely sucked, big time, but we still managed to find joy in our lives. So now, when I hear that Ghostface song, it isn’t tears of pain…it’s an overwhelming feeling of appreciation, of knowing that I found my strength in the struggle.

One thought on “Sugar Water Was Our Thing”