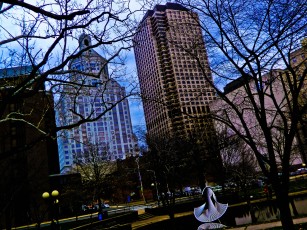 …coming from where I’m from, I’m from…

My city isn’t like your city. It isn’t a booming metropolis, a cultural hub, or filled with a wealth of architectural wonders. It’s filled with crime, poverty, unemployment, and often times, harbors smells of desperation and despair. It’s located in one of the richest states in the country, but the disparity between those who have and have not is vast. In my city, many of my former classmates are felons, drug addicts, or unmotivated individuals with no drive or purpose. Even the lyrics Biggie Smalls spat don’t hold true for this community (cuz the streets is a short stop, either you sling a crack rock or you got a wicked jump shot), because the chances of anyone having a wicked jump shot are far and few between, and at most, hand to hand is as high as they would get on the corporate street ladder.

Even amidst all of this negativity though, I, and others like me, managed to find a bright spot. We held on to two important elements that were hidden in the trenches, elements we had to search diligently for: hope and motivation. The majority of us city kids grew up with nothing – in the projects, section 8 housing, and shopping at C-Town with our paper food stamps. It is so easy to follow the lead of those before you, who never sought to aim higher. We could have easily been led into complacency  -because, if that’s all we know, then that’s all there is, right?

But no. For some reason, the folk in my generation determined that there was a way to pull ourselves out of the abyss of apathy. We decided that education was the ticket to our release from the confines of the stoop, the allure of the street corner. Even through adversity – pregnant barely past our teens, lack of sufficient income, crabs in a barrel attempting to pull us down from every side, we still managed to succeed (still I rise!). My generation, my peers, consist of lawyers, doctors, artists, entrepreneurs, professionals. We saw adversity as a challenge, not a hindrance or a reason for us to give up. We’ve shattered the plexiglass ceiling of the place we called the ghetto, with our adjustable ladders of steel. Those ladders don’t have a limit to their extensions, and have allowed us to continuously build and progress.

It’s difficult sometimes, to drive back through my old ‘hood, and see the seemingly lack of progression. It can be frightening, to see the same listless eyes, even though they watch through different faces. That drive can make you feel hopeless, as if nothing has truly changed. Looking at those to the left and right of me though, I know that feeling could be farther from reality. I’ve seen hard work, I’ve seen the strive for change, and I’ve seen the success that can occur when the two are coupled together. My city isn’t like your city – we don’t have its sexiness, nor do we have its allure. Nonetheless, my pride in what we do have – people with the want, the drive, the need to rise- is relentless. So I’m glad my city isn’t like yours; if it were, it would have never created the experiences that gave birth to people like me.